Over the course of the second semester, the first year students have been engaging in a range of visual practice that attest to the world we live in. How we see the world and the way in which the world is seen (or understood) is as much to do with the visual as it is anything else. Understanding the visual, specifically as a social, political, cultural or economic communicator is key, specifically in an age of protest. With that in mind, how do we read images or produce visual narratives. Having explored the history of photomontage, the first year’s were tasked with making their own. Some foreground text (with imagery), others used an assemblage of images to narrate a topical issue, visually, with consideration given the public sphere, social media and geo-political affairs overseas ‘and’ at home, whilst some chose to parody existing visual works, reframing public awareness campaigns to critique the contemporary political landscape of the UK.

Image and text by the students:

Erin Cooke:
My concept for this montage was to capture the main focus in our society when looking at social media, we are more interested in reading about celebrities that have no part in helping the world and instead actually using something that will impact our lives and educate us in politics. I then used all these headlines in my montage to create a message for my generation to start being more aware.

My photomontage depicts the Manchester Picadilly protesters last week, with Turkish tanks behind them on the tracks. In the foreground is a hand holding a phone, showing negative and ignorant tweets about the protest. I intended for this to reflect the important reason for these protests taking place, as well as how the general public respond to third-world problems that do not concern them personally. The protesters are disrupting transport in and out of a Manchester station to draw attention to a crucial problem in Afrin, where the Turkish are attempting to carry out an ‘ethnic cleansing’ by taking out the YPG who they believe to be terrorists due to their very left-wing views. They have essentially brought the problem onto the train tracks of Manchester, which is why the tank is here behind them and threatening them. The hand holding a phone suggests a British commuter browsing through twitter, ignorant of the protest, while the tweets show ignorance and annoyance also. They are real tweets selected from the website. This is a comment on how we as a privileged first-world society pay no attention to problems in other places in the world that do not concern us, and react to disruptive exposure of these problems with anger and ignorance. 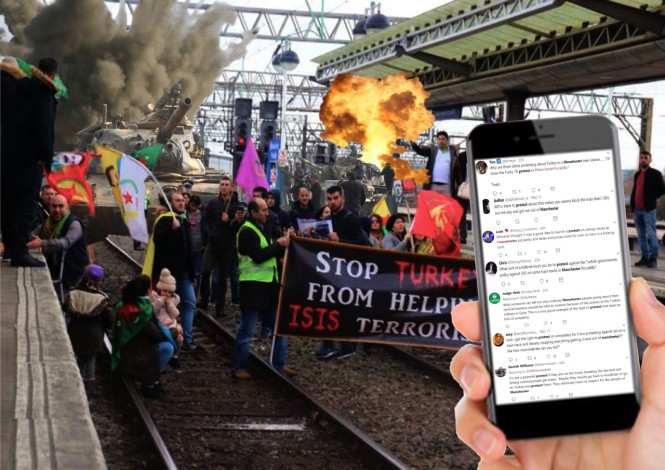 In 2016, a poster for a new campaign on the UK’s transport network brought outrage to some. As the “See it. Say it. Sorted.” poster is not only racially suggestive but also has a scary resemblance to the images of the Jewish persecution propaganda used in Nazi Germany. The poster shows a suspicious looking Muslim man in the dark foreground and a white woman behind him with the caption “See it. Say it. Sorted.” To me the suggestiveness of this poster comes off entirely racist. So, in response to this poster I created a photomontage using the layout of the “See it. Say it. Sorted.” Poster, but instead filled it with my political beliefs. The antagonist Muslim man in this poster has been replaced with Theresa May, Leader of the Conservative Party and current prime minister. Based on my political beliefs, I believe that she is more dangerous than a Muslim man in a big coat. I then replaced the white women in the background with various protests that pair with my political status and a previous photomontage of Peter Kennards “War Head”. All my political beliefs montaged onto this poster as an advert for the concerns we should all have in this western world and not this racially suggestive poster created by the National Rail and Department of Transport.

The original is on the left, mine is on the right.